Since 2012 Superfly.fm dedicates this weekly radio show to the different rhythms of the Amazon state. In One Note Samba you get to know the Brazilian performers from the late 50s to the present. From the beginning Shantisan aka Herbert Bachhofer has been the always well informed host. His focus is on Rio De Janeiro and Sao Paulo, the centres of Samba and Samba Rock, as well as Brazilian popular music (MPB) and the Black Rio movement, which was oriented towards American soul and funk. But Shantisan is also a jazz cat: fusion, samba jazz, bossa swing and the global influence of Brazilian music on jazz make us dance in Shantisan’s DJ sets.

For many years Shantisan has regularly delighted the public with his DJ sets. In January 2019 Shantisan together with Ach founded the vinyl DJ sessions Our Latin Thing Vienna on the occasion of the birthday party for the 7th anniversary of One Note Samba.

Do yourself a favour and tune in to Shantisan’s radio show 1 note samba on 98.3 Superfly. An eclectic selection of sunshine in musical form – every Sunday from 20.00-21.00 (CET).

Growing up in Lower Austria Shantisan came into contact with the black music culture at a very early age. Since then he has not stopped collecting records. He started with Hip-Hop and Downbeat, but soon it was Soul, Afro, Jazz and Bossa Nova, but especially Brazilian records he was after.

You can listen to both tracks below!

This is the first piece of music that Shantisan edited & re-rubbed back in 2003. The irresistable Jorge Ben guitar is still amazing!

Taken from a 4-track E.P. featuring: 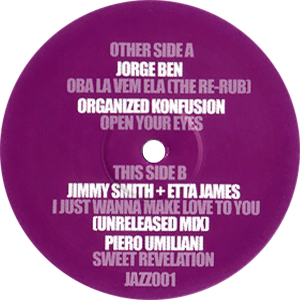